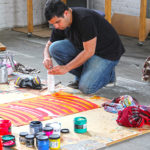 Beautiful hues of bright ceries red, sky blue and orange hit you in Nima’s works, with streaming colors into calligraphic abstract forms. Nima is an amazing colorist, bringing motifs of his Persian culture and calligraphy into a new livelihood, imbuing them with the emotional weight of Persian poetry that they illustrate.
As the son of Iran’s most influential journalist Masoud Behnoud, Nima grew up in an intellectual circle in post revolution Iran, an oppressed society that left few outlets for youthful energy and expression. Yet the repression conversely functioned as the strongest form of stimulus for creativity among the youth. Nima practiced painting, drawing and silk screening in his teenage years: a practice that later on became the basis for creation of his clothing line NIMANY that he established in 2004 in NY. Today Nima is the creative director of NIMANY, which is being sold in over 25 countries and has gained critical acclaim by being worn by celebrities such as Heidi Klum, Nicky Hilton, Jim Carrey and Kevin Spacey and has appeared in publications like Vogue, Rollingstone, Maxims and Washington Times.
The idea behind the clothing line was bringing Nima’s studio paintings, sketches and drawings inspired by calligraphy and forms reminiscent of Persian arabesques onto clothing: making wearable art.
Both in his wearable art, the dimension of his practice oscillating between fashion and art and in his studio art, the colors are bright and sharp. Despite the melancholic meaning of the poetry that may be legible or poignant story of the newspaper print, the sensation evoked is pure pleasure.
His work is inspired by Warhol’s aspiration to be Matisse, creating dreamy palettes of a master colorist and adopting his machine like production. He recreated Warhol’s populist glamour in an entirely different language, he made pop art that is entirely Iranian and of his own. His art puts a sheen on the heavy meaning that underlies the writings of the calligraphic forms or other prints that he uses, instead he makes it a representation of the glamour and éclat that runs through the environment of Iran’s youth that has been created despite all the suppression, imposition of blackness, forbidding colors and celebrating death as a center point of the revolutionary culture.
“The concept of hand-modified clothing started when I was 15 with a group of friends. We made hand-distressed denim and held shows in the underground parties in northern Tehran. We sold them to the hipster crowd not to make money but to be cool.
Today same hunger and fascination has turned into an organized clothing line — NIMANY — and now my dream is to show the world the magical teenage years that we had in Tehran. My focus is the lifestyle that developed in the alternative scene of Tehran and how modernity was born within the unexpected: the underground life of a country like Iran.