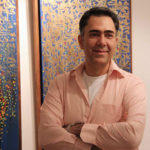 Mehrdad Shoghi Haghdoost was born in 1972 in Iran. He started calligraphy and painting very young. He went to the last remaining masters of the art to learn the Iranian traditional arts such as Illumination, Gol-o-Morgh, paper-making, and restoration of calligraphic pieces.

In mid 1990’s he participated in projects commissioned by Ministry of Culture and Art to reconstruct/reproduce old calligraphic masterpieces. He had been so attracted by the spirit embodied by this style, that he found himself dedicated to kufic writing, and Khatt-e-Mehr was the fruit of his studies and experiences with Kufic.

The subjects of his artworks mostly are from well known Iranian sufi poets such as Rumi, Hafiz and Abdollah Ansari.
Mehrdad has presented his work in more than twenty solo and group exhibitions in UK, France, Iran, Kuwait, Turkey, U.A.E, Qatar, Malaysia, Switzerland and Canada. 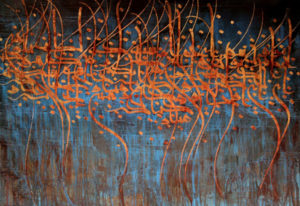 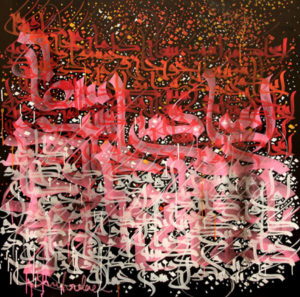