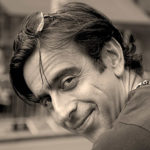 Manou Marzban was born in Geneva, Switzerland in 1962. He studied film and history in the United States, before getting an MBA and entering the corporate world. He was a dot com founder in the late 90s, and is currently an IT and marketing consultant for blue chip companies.
He started drawing from an early age, concentrating on still life and pencil etchings. Manou had his first opening in Washington, DC (1993). He has since been featured in events across Europe.

Manou Marzban is based in Golf Juan, France
“Dramatic, thought-provoking, and above all beautifully animated and colorful” PBS, USA – June 2012
“Art that aims to provoke the viewer, forcing them to engage in their own way” Riviera Times – February 2013

« Manou : For my art, the key element was the reaction that my art drew from different audiences. I had a ‘eureka’ moment when I was walking around Berlin, after an exposition, and was captivated by the street art. The street art in Berlin is full of energy and tells volumes. You literally go on a visual journey that works because the series of words and images are juxtaposed in such way that make you ponder stories rather than just be stimulated visually. It occurred to me, during one of my meditations on the walls of Berlin, that it is a shame that you cannot physically take the graffiti home with you. And that is what made me decide to do the ‘Streets’ and the ‘Pop Collage’ series. I wanted to make street art that you could take home with you and hang in your living room.…. » Setareh Sabety, Huffington Post 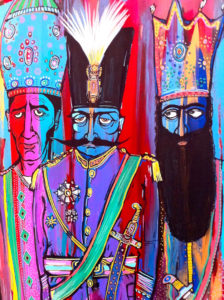