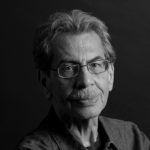 Kambiz was born in 1942 in Shiraz, Iran. He studied in Tehran Fine arts Faculty and has been publishing his cartoons and caricatures in many well-known local and international newspapers and magazines for 60 years. honors and awards: Grand Prizes and gold medals of Japan, Germany, Italy, Switzerland, Belgium, Turkey, Brazil, Yugoslavia exhibitions and some other honors and awards.
Kambiz has also sat as a juror for a number of international cartoons exhibitions. he realized as many as 50 individual and group exhibitions in Iran and abroad. he has taught the art of caricature in Tehran University.
Many arts centers, galleries and arts museums throughout the world have bought his works for exhibitions. Kambiz Derambakhsh has published many books on illustration and caricature in Iran and abroad. In april 2013 his first book was published in France ‘The World is my Home’ (editions Michel Lafon)
Kambiz Derambakhsh received the Chevalier of the Legion of honor Medal during a ceremony held at the embassy of France in Tehran in 2014.
The medal, which is the highest decoration awarded by the French government, was presented to derambakhsh by French ambassador Bruno Foucher during a ceremony at his residence in Tehran.
Derambakhsh is the first Iranian visual artist to have received the award.