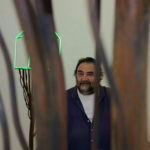 Behruz Heshmat was born in 1953 in Tabriz, Iran and moved to Austria to pursue sculpture at the Academy of Applied Arts of Vienna where he has lived ever since. He enrolled in masterclasses with Wander Bertoni, an Austrian sculptor of public art. Since then he has received many awards and commissions for public art installations, particularly in Austria and Germany.
Since 1987 has worked with the Vienna Artists’ House, which awarded him the Gold Medal of Honour in 2005. He also won the Anna Sussmann Prize from the Anna and Heinrich Sussmann Foundation in 1991 and the prize for small sculpture at the Gabrovo Biennale in Bulgaria in 1981.
As well as having an international following of private collectors, Behruz’s sculptures are in the public collections of the Checkpoint Charlie Museum, Berlin, the Federal Ministry for Art and Education, Austria (the BMUKK) and the City of Vienna.
Heshmat has been invited to take part in several international sculpture symposium.
He is also a poet, writing verses with few words and layers of meaning. While his work may convey a sense of loss or solitude, the artist is also funny, full of laughter and jokes.

His tree houses sculptures sway between his memories and dreams of belonging. They are a symbol of home and family, of security and most importantly of Identity.
They reflect a different state of mind, and often a nostalgia for his homeland, Iran and the steel branches of the tree could also be the roots.
As an Iranian who moved to Austria in the 1970s, Heschmat’s treehouses are an exiled artist’s imaginative interpretation of home. To Heschmat, the house is central to human existence, and emphasise the instability and fragility of our notion of home. His treehouses mutate : their materials, colours and contents continually change and convey a great sense of energy, sense of balance, for the laws of gravity with the position of the house.
These tree houses were homes of metaphors. 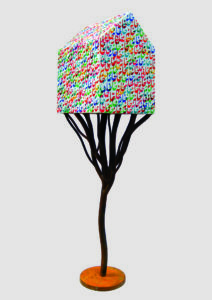