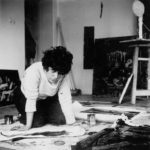 Behdjat Sadr Mahallati is born on May 29th, 1924, in Arâk (Iran),. She is the daughter and first child of Ghamar Amini and Mohammad Sadr Mahallati. Her father is a clergyman working at the Ministry of Justice, fond of poetry, calligraphy, and music. Her mother is an open-minded, attentive woman. Her paternal uncle is Mohsen Sadr Mahallati (Sadr ol-Ashraf), a former Minister of Justice and Prime Minister. She studied in Tehran and learned silk crafts with a “Gypsy” woman after an art teacher discouraged her from being a painter, considering she had no talent for it. She chose to train as a teacher and became a secondary school teacher in order to be financially independent and to support her family. She started taking an interest in painting, and joined Ali Ashgar Petgar’s painting classes in 1947 (first private painting class for women in Tehran in 1940).
In 2004, The Tehran Museum of Contemporary Art pays tribute to her with a vast retrospective exhibition of her work as part of a series of exhibitions devoted to the pioneers of modern art in Iran.
In 2009, she passes away due to heart failure in Corsica, while swimming in the sea. In the summer of 1991, she wrote in her notes : “I like the sea more than the earth. In the earth, one ends up buried. At sea, one is immersed, as one is immersed in joy, in beauty, in happiness, in delirium, in work. […] The earth has mountains, hills, crevices, while the sea is endless, driving the eyes towards infinity.”