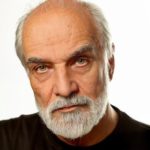 As a world-renowned painter, critic and theorist, Aydin Aghdashloo has been at the forefront of Iranian Contemporary art for over fifty years. While predominantly self-taught, he considers himself indebted to the traditions of the european renaissance as well as islamic art. Though history has plagued both cultures with religious and imperial conflicts, the desire to understand, critique and highlight the commonalities that they share, lies at the heart of Aghadashloo’s inspiration.

The compositions and signature style of Sandro Botticelli provided an invaluable foundation for his most notable series, entitled Memories of destruction. in its early stages, this particular collection of work forced Aghdashloo to create and ultimately destroy a european masterpiece. in a technical sense, this can be seen as homage to his passion for illumination, calligraphy, miniature painting, and the reconstruction and/ or restoration of masterworks. it is also an analysis of the displacement of cultural values and the annihilation of beauty and identity in the face of conflict. as the series progressed into the late 1970s, Persian miniatures as well as images referencing various islamic dignitaries began to outweigh Botticelli’s figures, but were nevertheless painted to the same caliber of Aghadashloo’s earlier work. it is within this context that he was able to unite his Iranian roots with his appreciation for european traditions.

Stretching beyond the boundaries of his studio, Aghdashloo is an expert in Iranian Pre-islamic and islamic art and artifacts. he has also been an active consultant and adviser for many prominent global auction houses, including Christie’s and Sotheby’s in London. after studying at the University of Tehran, he has become a lecturer of art and art history all throughout Iran, most notably in Tehran, Kerman, Mashhad and Shiraz. he has also published eight books, the most prominent of which being his collections of essays and writings on Iranian Culture and art history, summarized in of Joys and Yearnings (Selected essays and dialogues: 1974-1991) and Years of Fire and Snow (Selected essays and dialogues: 1991-1999). 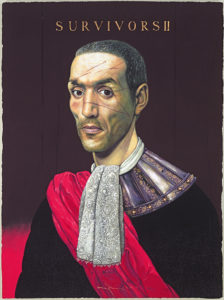