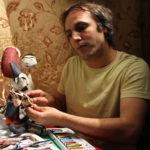 Born in 1973 in Tehran, Alireza Mirasadullah is an artist who works predominantly in the medium of painting, but includes dolls and stop motion films in his art practice. Alireza is also a well known author in his homeland of Iran and has written 12 books of short stories, novels and poems. He has held more then 10 solo exhibitions in Tehran from 1995 to 2008 and has also exhibited in solo shows in Auckland, New Zealand 1999 and in London in 2012.
In addition to his ‘art projects’ Alireza has worked as a part-time journalist in Tehran and is currently working in London for the BBC World Service as a TV producer. Through travelling and his work as a journalist Alireza continually gathers ideas and concepts from the ordinary lives of individual people. His art practice reflects on the behaviour of these people in the context of different societies. Humour plays a significant part in his writing and art projects. Through the use of symbolism and stylisation he reconstructs contemporary ideas of social interaction often combining the various strands of his practice with animation techniques. 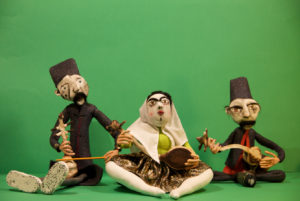 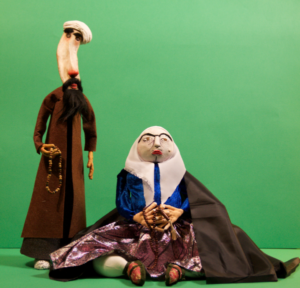