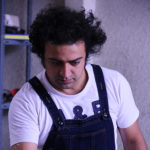 “Today, in societies similar to ours, questions have been replaced by repetitive mannerisms so much so that they have become an epidemic substituting the social values.
This ignorance of questioning values in turn has deemed Time’s role in understanding and demanding change redundant.
Modern Art, through its very nature of modernizing and materializing social values and aspects of everyday life, provides a venue for the audience’s mind to go further than the repetitive mannerisms and start looking at social issues portrayed in the artwork with an astute and aware mind. The more the artist uses delicate and mindful forms depicting the complicated social values and idiosyncrasies, the more minds will awaken upon coming in contact with the artwork, in turn creating a wave of consciousness, questioning the reasons why certain traits have become epidemic and their role in it all…
Alireza Masoomi has brilliantly unveiled some of the everyday nuisances, allowing his audience to stand at a safe distance and gaze upon them, all the while forming the ‘why’ within our minds.
Alireza Masoomi’s art has been able to simplify and give form to everyday mindless routines (such as a bus on its way to Freedom stop), allowing us to concentrate on repetitive actions performed without much thought throughout the day, often rushed and greedy in its social settings of grabbing ‘more’ for ourselves even if it’s only the metal bar on a bus.” 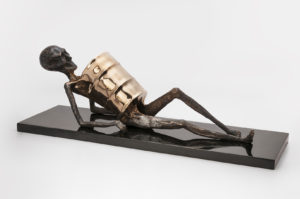 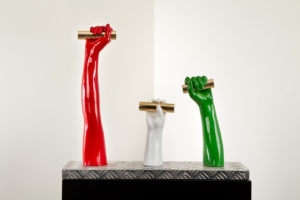