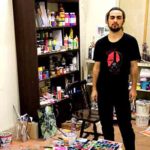 Adel Younesi was born in 1985, in Hamedan, Iran. Structurally complex, his works evoke a mysterious aura. In quality and content, they resemble dreamscapes. His artworks have been exhibited in different exhibitions around the world.
Younesi’s paintings prepare a context in which the characters and creatures live an eternal peaceful life in the frame; though it is not the whole story. If we look more precisely we would find out that the cheerful players who play wind instruments like Balkan gypsies, are standing at the bottom of the ocean.Though huge sharks passing them by quietly and there would be no bloodshed, but there would also be no sound coming from those instruments; there is nothing but bubbles and the continuous sound of suffocation! String orchestra and classic singers are also performing under the water; while a herd of zebra is surrounding them. In another piece imperial soldiers riding horses as if they are executing the marsh of victory or royal welcome; with no instruments on their hands while wearing clown hats; arrayed in front of a 17th century palace that hardly exceeds the height of horse’s legs.This jubilation happens in pure placeless-ness; in a sand-bed in which the horses are sinked to the knee, head downed and therefor have not the ability to step forward.Till we look at these works as an outsider everything seems beautiful and full of peace; but the moment we step in the paintings world everything seems upside down.What happened to Noah’s Ark?This land is no longer a safe place in flood but somewhere like Pinocchio’s amusement park; where there is sheer happiness but there also is presentiment of imminent nullity! We may easily call what happens in Younesi’s paintings «the death of hope».This colorful world with all its seemingly peaceful human and animals, is like a purgatory that despite having all heavenly elements, the doors of «hope» are closed forever in it. It is obvious that without «hope» mirth pales and all those smiles and dances and happiness, turn into a lifeless body of humane gestures: signifier without any signified!
Previous series by Adel Younesi had more or less the same characteristics. First buses and cars and ordinary people were detached from their routine context and entered unfamiliar backgrounds; this transmission from familiar backgrounds to unknown lands with no horizon steps up in the next series.This is how asphalted grounds and cars and people and animals became hovered in an atmosphere like there is no gravity; and there begins the bewilderment period of the artist’s paintings. A while after, this suspension gives its place to asteroids.This starts with falling onto the surface of the asteroids; as if after a long time in bewilderment, people and animals and automobiles get gravitated by asteroids and fall onto them; asteroids that remind of the remote pokey little planet of «le petit prince» where «you just need to move your chair to see the sunset as many times as you wish».Though these asteroids ofYounesi seem to be mentioning pure freedom and independence; but passing through the aforementioned surface, they turn into small exiles that a huge number of the artist’s compatriots are condemned to live in.
Adel Younesi’s paintings are also representing the same acceptance. When the orchestra plays and bubbles start to dance; everything is in ultimate order and peace; at the same time a huge nuclear mushroom is in the background… 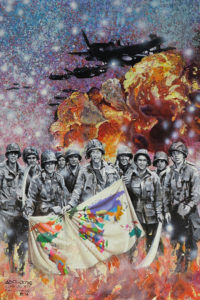 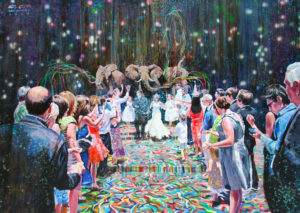